What we can learn from john wooden on coaching 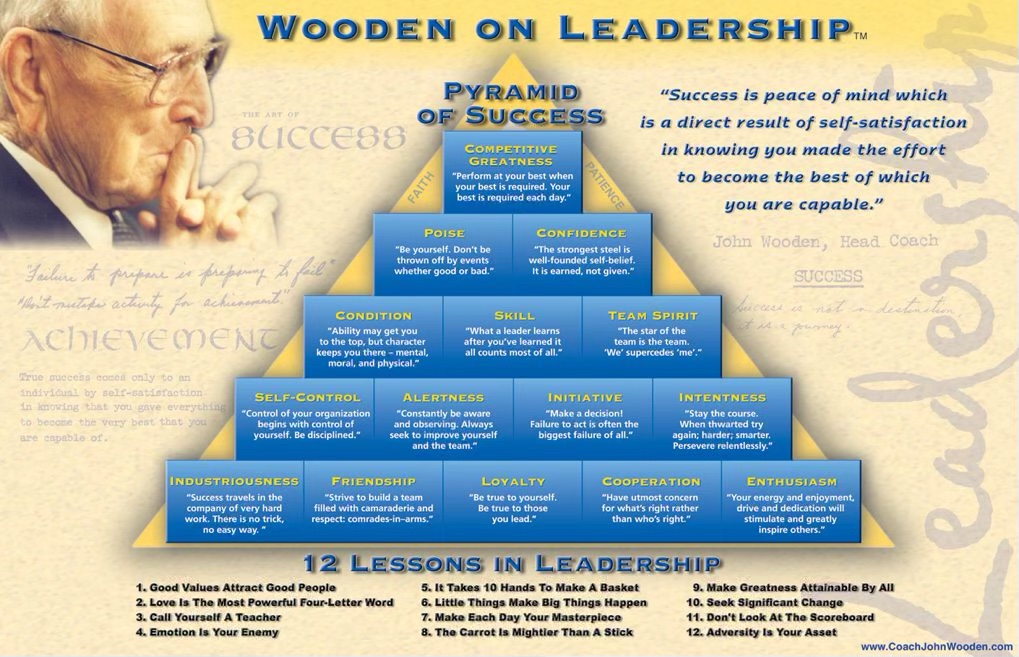 Coaching values as seen through the lens of legendary coach John Wooden:

Many legendary coaches such as Phil Jackson, Pat Riley, Bill Belchick, Red Auerbach, Vince Lombardi, won with the use of winning systems and formulas.  Of all the legendary coaches in sports history, John Wooden definitely stands out.  It’s tough to argue that his run as head basketball coach for UCLA isn’t one of the greatest (He did win 10 national championships over a 12-year period…).  Wooden’s coaching philosophy was centered around his “Pyramid of Success,” containing his core values (conditioning + fundamentals + unity).

Here are simple (not easy) ways to help build the winning formula/recipe:

*Create structured routine-create process goals that will get you closer to any outcome (think more about the process rather than the result).

*Be brilliant on the basics (think “Maslow’s Hierarchy of Needs”-everything from psychological/safety/health needs to reaching new heights toward self actualization.

“Success is peace of mind which is a direct result of self-satisfaction in knowing you made the effort to become the best of which you are capable.”

During today’s Mastermind Monday, we discussed the impact of your voice as a coach/leader/mentor. The little things really matter. Setting expectations, focusing on mastering fundamental skills, adjusting from any setbacks and mastering specificity/individual differences can be good characteristics of a great leader.

This doesn’t go without being said that you consistently show up, stay disciplined, win the day and make it happen.

Have structure weekly (have a top 5 list of non negotiable weekly and order of most importance to YOU (examples for me: follow structured exercise/recovery, consistent nutrition practice, filling gaps on lifestyle habits (adjusted when needed), managing stress through hobbies, etc…

While John Wooden was a legendary basketball coach, his methods apply to any industry where coaching is involved.  As fitness professionals, we can learn from his pyramid of success and coach our clients to the best of our ability.  In addition, we can build a strong team of like-minded coaches becoming an unstoppable force and moving our industry forward.  What I’m trying to say is…